.NET ecosystem has seen some rapid changes in the recent times. With advent of .NET Core, the official cross-platform implementation of the runtime (and SDK) Linux and Mac users have gained a way to write and run .NET code in the comfort of their favourite OSes, all supported and ratified by Microsoft. The new and shiny tooling as well as ASP.NET Core’s impressive performance (in top 10 of TechEmpower’s Fortunes benchmark) have overshadowed .NET Core’s older x-plat sibling, the Mono runtime. But it is one of Mono’s targets that interests us today - namely WebAssembly. Ladies and gentlemen, allow me to introduce…

An experimental .NET web framework using C#/Razor and HTML that runs in the browser via WebAssembly

…but not exclusively, more on that later.

Disclaimer: this article assumes at least some familiarity with .NET, Razor, C# and web technologies.

Another disclaimer: as stated above, Blazor is an experimental piece of technology and as such everything about it can change, so the contents of this article might not reflect the current state 1:1.

And then, depending on your editor of choice grab Blazor Languge Services Extension for Visual Studio 2017 v15.8 or above. Note: you will need ASP.NET and web development workload installed.

Alternatively, for VS Code users out there there’s Razor+ extension. To create projects using the CLI, run the following command:

Admittedly, I recommend going the Visual Studio way because the tooling is objectively better and regularly updated.

For Visual Studio users out there, simply create a new ASP.NET Core project and select one of three Blazor options presented in the dialog. And what options they are!

I mention full debugger support for server-side Blazor - that’s because for the other two options the debugging experience is currently extremely limited and can be done exclusively using Google Chrome. See the docs for details.

Let’s create a new standalone project. Once that’s done, you can launch it by either using ctrl + F5 in Visual Studio or dotnet run CLI command. Either way, you will know all went well if the following appears in your browser: 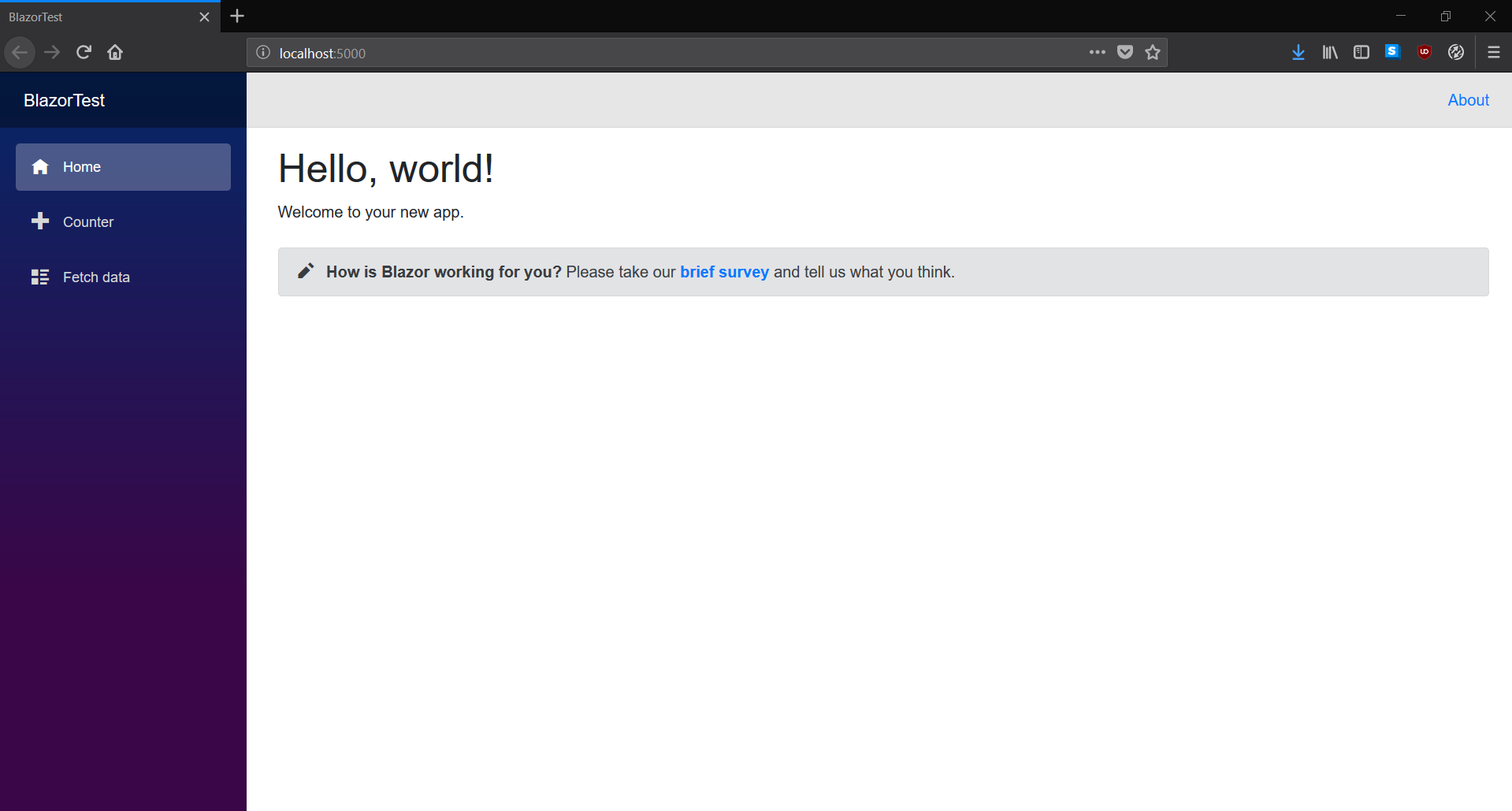 Should the app fail to run, it is worth checking if there are conflicting .NET Core runtime versions. Uninstalling the old ones should help.

As of now, there’s no live reload support. If you’re using Visual Studio, then app should rebuild automagically when you refresh the page and changes are detected. For CLI users, you will need to add

In Blazor, everything is a component, be it a layout, a page or, well, a component. Let’s inspect Counter.cshtml sitting in Pages folder. The code should look similar to this:

The code should be familiar to anyone who had worked with Razor before which should not be a surprise, given that Blazor = browser + Razor. Click the button and you’ll see the counter increment just as you would expect, given the C# code above. Yes, C#!

@page "/counter" directive tells Blazor that this component is a page and can be routed to.

<h1>Counter</h1> is good ol’ plain HTML, no surprises here, unless you’re easily startled by headers or XML tags in general.

<p>Current count: @currentCount</p> is where the interesting stuff begins. The @currentCount is a reference to the field defined in the @functions block below and will cause the current value in the variable to be rendered there.

<button class="btn btn-primary" onclick="@IncrementCount">Click me</button> is where we see the onclick event handler which is also a reference to the IncrementCount() method below.

Finally, there’s the @functions block where we define our variables, parameters, functions, etc.

One page can have multiple routes assigned to it and routes can have parameters. Let’s modify the code to allow a route which would set an initial value to the counter:

We’ve added an additional route with parameter constrained to int type, changed currentCount field to a property (properly PascalCased) and decorated it with [Parameter] attribute which allows us to navigate to http://localhost:5000/counter/3 (adjust the port if needed but 5000 is the default for dotnet run) and we should see that the counter is initialized with 3. Neat!

At this point you might be thinking “But do I have to have everything in one file?” and short answer to that is no. The long answer is that we can make use of @inherits directive and extract the logic to a separate class which our component would inhertit from. The “code behind” class must inherit BlazorComponent for that to work:

will result in the same thing but split in twain.

As most frameworks do, Blazor allows components to use layouts to reduce code repetition. A brief look at MainLayout.cshtml file in Shared folder will reveal that to create a layout we need to:

In Pages folder there’s a file called _ViewImports.cshtml which is a reserved name meaning something along the lines of “add the content of this file to all page components that are siblings of this file or in child folders”. Inside, there’s one line @layout MainLayout that controls which component is to be used as the layout. Each page can override this by using the same syntax or refuse the layout at all by using @layout null.

Obviously, not every component needs to be a routable page, but a reusable piece instead. The way we define those is almost identical to pages sans the @page directive. Even though the cool factor of this framework is already pretty high, let’s have it go through the roof by adding a new file CoolCounter.cshtml in Shared folder. Once we have it, let’s write some code:

After reloading the counter page you should see something like this: 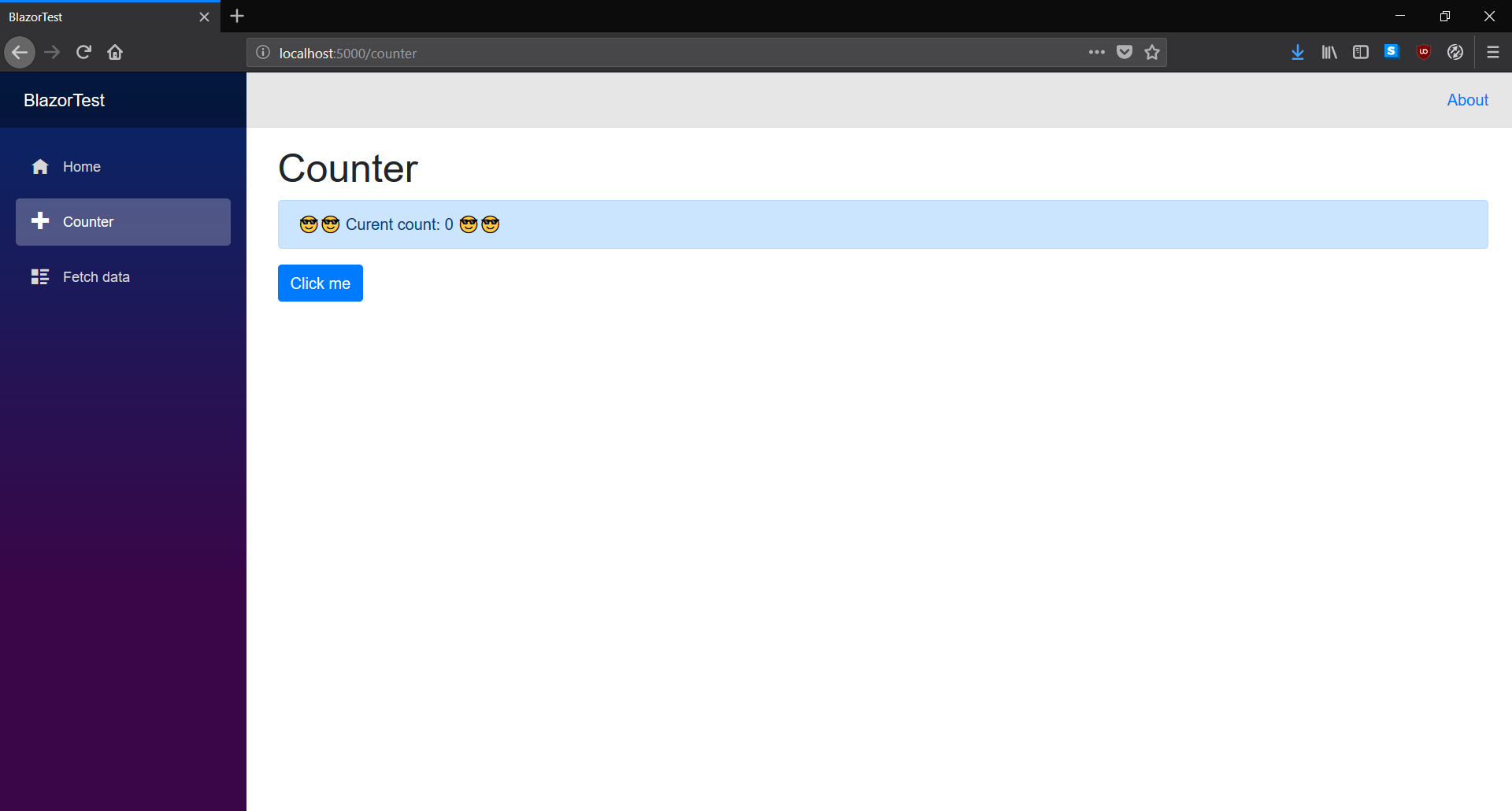 Let’s dissect the code. Using components is as simple as writing a tag with its name, CoolComponent being the case here. The ChildContent property is a reserved name for, as the name suggests, child content that you can put in the component. In the example above our child content are two smiling faces with sunglasses emojis rendered twice with @ChildContent to ensure maximum coolness.

A familiar [Parameter] attribute has made a reappearance but means something different for a non-page component. We can use it to pass parameters in the markup, Count="CurrentCount" being the syntax in the tag here. What other things can be passed as parameters? Sky is the limit. Say that we want to add some extensibility to the CoolComponent and have it somehow react to click event. Easy peasy, just add the following line in the @functions block:

and also add the onclick handler to the div element:

Finally, we need to pass some action as a parameter where we invoke our component:

This handler could, of course, be extracted to a separate method but inline lambda expressions are acceptable as well. So let’s reload the counter page, increment it a bit, click the component and… Nothing. That’s because the action wasn’t directly called in a DOM event handler. We need to give the framework a small nudge. Let’s change our component invocation a bit:

By calling the StateHasChanged() method we inform Blazor that something has happened outside the area it keeps under watch and that the document tree needs to be updated. The example also shows the point at which we could start seriously considering dropping the lambda in favour of a separate method.

Components are reusable by themselves but there is a way to make them even more universal and that is to have them accept templates. Let’s have a look at FetchData.cshtml in Pages folder. It’s a page component demoing the use of HttpClient provided by DI and @inject directive and displaying the weather data fetched with it. The table where the data is shown is perfectly fine but we can make it reusable by extracting it to a separate component. Let’s do just that - create a new TemplatedTable.cshtml file in Shared folder and add the following code inside:

The @typeparam directive makes the component a generic class and allows it to accept any type of item which is vital for list-type scenarios. Unfortunately, there’s no way to put type constraints on the generics as of now.

With that ready, we can throw out most of the table code from FetchData.cshtml and replace it with the following:

After reloading the fetch data page, we will see exactly the same thing but what’s important is that we did it the templated way.

Nearing the end, let’s add an entirely new page and have it display an old-fashioned clock with hands. So, in the Pages folder let’s add a new Clock.cshtml file with the following content:

We will also need to add some CSS to site.css file sitting in wwwroot/css folder:

But given that we cannot have users need to guess the URL of every page in our app, let’s also expand the navigation in NavMenu.cshtml in Shared folder with a new item:

NavLink is Blazor’s built-in component which renders as an anchor element but adds .active class when you navigate to a page in the href parameter.

Ok, but what has just happened? Well, we’ve built a half-decent clock using Blazor and a smidge of CSS. By using void OnInit() override, we could hook into the component’s lifecycle and initialize the timer that is set to tick every second and update the currentTime field. Because it’s not happening as an effect of some DOM event, we need to notify of changes using StateHasChanged() method. But wait, the time’s wrong. At least if you are not living in the UTC timezone area, that is. That’s another limitation of the experimental state of Blazor - the current locale are not being pulled from the browser, so the framework doesn’t know what timezone the user is in. This is to be amended in some future release.

I hope that you’ve found this article informative and maybe, just maybe, you will give this amazing piece of tech a go. For any further reading, I recommend visiting the Blazor website and their GitHub repo, the best source of Blazor info.

That’s it! Thanks for reading and happy hacking.