Recently I needed to carry out some complicated process in my Node.js side project. This process consisted of multiple steps and while some of them could be run in parallel some other required to be run in sequence. Here I will show the basic solution I came up with as it’s quite short and demonstrates the way of using both Promises and async/await.

I wanted to follow the Command design pattern where Command object representing a single operation is provided with all the data required for carrying it out. Later such Command object is provided to a dedicated CommandHandler that would actually perform the task at hand, possibly making use of some external dependencies.

First, let’s prepare some classes that will represent our commands. We need two classes for it: one for the atomic command that will be provided to a dedicated CommandHandler, and one composite command for composing multiple commands (either atomic or composite) into a set that can be handled either in parallel or in sequence. Let’s call them SimpleCommand and CompositeCommand --- they will be quite basic.

For the sake of simplicity we won’t require our atomic commands to describe any real operations --- we will provide them only with identifiers so that we can track if everything works fine:

A composite command is also simple --- it needs to have a collection of nested commands and a flag that will indicate whether it’s possible to handle these nested commands in parallel, or whether they have to be run in sequence:

Since our simple commands are just for demo purposes we can handle them all with a single handler that will simply make each of them take some random time to complete. We will also include some console.log calls there that will show us when the handling of given command started and completed.

We will expect the handle method to return a Promise that will be resolved when command has completed. To makes things simple we don’t care about any result (which also matches the default approach as when using Command design pattern we usually make an assumption that commands can be handled asynchronously, e.g. queued).

Now let’s define a sample composite command that we would like to handle so that we better understand its data structure. We will have five main stages marked with letters from A to E.

As you can see, stage A is to be executed first, then stages B, C, D in parallel; finally stage E should be handled. Each of these stages is composed from other commands which you can see on diagram below. 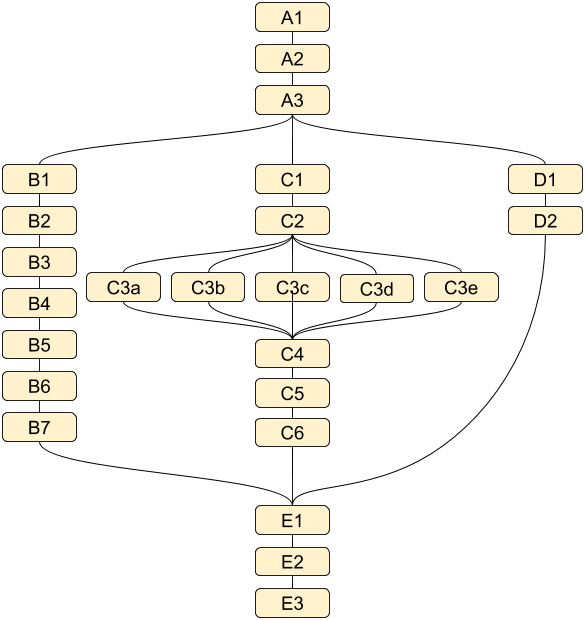 Now we can start implementing CompositeCommandHandler that we will use to handle our command. It will accept an instance of SingleCommandHandler as a constructor argument and will use it once it reaches SimpleCommand object.

We will now implement the main handle method that will accept either SimpleCommand or CompositeCommand object. If SimpleCommand is receiver it can simply use SimpleCommandHandler to handle it. Otherwise it will call one of the methods we will define later for handling commands in parallel or in sequence.

The return value of our handle method is a Promise that will be resolved once a single command (in case of SimpleCommand is provided) or multiple commands are completed. We just need to check which kind of command was provided and --- for CompositeCommand --- whether they should be executed in parallel or in sequence. It’s easy to see that when we will be implementing handleInParallel and handleInSequence method we will be able to recursively call the handle method to execute each of commands provided to them, while these specialized methods will only be responsible for linking promises resulting from it in an appropriate way.

For each of the remaining methods we will compare and contrast two approaches --- we will implement them with Promises first and then we will compare it with a solution based on async/await syntactic sugar. If you’re not familiar with these please check related pages on MDN Web Docs: async, await, Promise.

Let’s start with handleInParallel and Promise. Our method needs to return an instance of Promise that should be resolved once all provided commands are completed. To execute these commands in parallel we can call the handle method of SimpleCommandHandler for each of them. This way we’ll obtain a set of promises. When all of them are resolved we can resolve the promise that was our return value. Luckily we can use Promise.all method to easily obtain the composite promise we need to return.

First, we map each element of commands to a Promise using the handle method recursively (as command can be either simple or composite and we’ve already implemented the logic of handling them there). Then this array of promisses is used as an argument for Promise.all which produces composite instance of Promise class that we need to return.

We need only one more method to make our CompositeCommandHandler work and it’s handleInSequence Let’s try to use Promise again.

What we need to do is to handle the first element of commands argument. Only when it is completed (e.g. promise resulting from handling it is resolved) we can handle the next element of commands. We should do so until all commands are handled and then we can use the last instance of Promise as our return value. Let’s express this with code then --- for the sake of simplicity we can assume that commands will never be an empty array.

In this example we don’t care about the result of handling each command and therefore we can simple chain promises using then callbacks that don’t require any arguments. We produce first promise outside of the for ... of loop and then for each subsequent command we add a then callback that will handle the net element of commands and return resulting promise. This creates a new promise that we store in the lastPromise variable and use it in next loop. The final value of lastPromise is used as return value as it will be resolved when the last command is completed.

Since we’ve implemented all methods that were needed, let’s now run our sample composite command.

It will give different output each time as delays are random, but the order of commands execution will be correct.

So our code already does what it was expected to do, but the implementation of handleInSequence method is not as readable as we would like. Let’s check if using async/await syntactic sugar could improve this.

Wow, that’s something! As you can see we only need to loop through provided commands and await for each handle call. This will pause the execution of this method until this nested promise is resolved. (Of course, it won’t stop the execution of other callbacks that are in motion as this would beat the purpose of using an asynchronous tool like Node.js). Since we don’t care about results returned we can end our method without explicitly returning any value --- defining this method as async will automatically wrap it’s result value with Promise object that caller method expects to receive!

We can clearly see that this implementation is better and easier to analyze, so let’s use it instead of the previous one.

Since it went so well for handleInSequence, let’s now get back to implementing handleInParallel but this time using async/await approach. In this case it doesn’t result in an easy to read the code, though.

First, we can wonder why we can’t simply call the handle method for each command inside a for ... of loop and await for them to be resolved? The problem is that this will not yield the expected result --- note that we’ve already used this approach when we implemented handleInSequence method! The reason is that await would pause the execution of our method for every single handle call. This would prevent handling of subsequent commands for even getting started and instead of being executed in parallel they would be run in sequence.

Therefore we need to initiate handling of all commands first, and only then await for their results.

We are still calling our variable promises as this is what is really returned from handle and what is used by async/await syntax internally.

You will probably agree that in this case the solution with Promise was much more readable. Like we described above we are first mapping set of commands to set of promises by calling the handle method recursively and therefore they run in sequence. (We don’t have a need for map callback function to be declared as async as it doesn’t need to await for anything --- it receives Promise object from the handle method and it is expected to return one.

After mapping all commands to promises we need to wait for all of them to be resolved. Now it’s time to use await in a for ... of loop --- there may be some commands that will take longer to be completed, but even if this loop will be temporarily blocked by one of them them the remaining commands will already be in progress.

The order of awaiting doesn’t matter here --- if some command runs quicker and completes before we use await on it there will be no need to pause the execution of our method.

Finally, we don’t need to return anything as Promise object is automatically created when we declare our method as async.

Now we’re done - we have compared implementations using Promise and async/await. In our case handling commands in parallel was more readable when we used Promise, while for running in sequence async/await solution seems more suitable.

This demonstrates that for writing succinct and readable code it’s important to know both these techniques, to understand their inner workings so that we can use either of them depending on a task at hand.